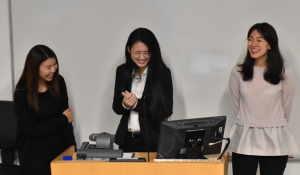 The Capstone (or Final Year) Project is a year-long project carried out independently by final year students under the supervision of a professor. It gives our final year students the opportunity to design, research, and write an in-depth research paper on a self-chosen subject in Chinese Studies to showcase their knowledge in theories and methods, as well as analytical skills and interests in different aspects relating to Greater China learnt from different courses.